Hey everyone welcome back to my blog! Due to currents restrictions and rules in Australia I have not been able to travel with my fellow bloggers and friends to capture the world around us. I have decided to use my isolation time to capture images from Home.

Above images are of some of the times of butterflies we have had visit us over the past couple of days.

I am starting to think my blog is based on my grandma, I wrote when she was alive and I was watching her in her last part of life, however I am now experiencing visits from her. I am the only one she is showing herself to, why me I ask, but at the same time it is giving me closure. To my knowledge I am aware that Pa has kept her ashes in his room , yet she is still showing herself to me. The afternoon of the 16th of September, I had a feeling it was going to be her last, but I hoped not, I took her Ashton-Drake Doll to her when she was in hospice, as asked the Doll to collect her spirit so I can bring her home. The next morning at 7:00am Grandma got her angel wings & for the past couple of Months I have been lucky enough to get visits from Grandma. That week of grandmas passing, I was walking down the hallway and I could smell her perfume, I had not had any messages from her for a few months until Feb-March this year

Kitchen Fridge
The first time was at night and I was going to the toilet, I heard a beeping coming from the kitchen, It was always normal for grandma and I to be getting out of bed at the same time, usually it was her checking on me to see what I was doing or If I was okay, – So I went to the kitchen and the fridge door was open , I closed it and worked out the problem, as I as walking out of the kitchen there was something there, something stripy, I ran through it to my room…

A few nights later I was asleep in my room, I could feel something next to my room, I woke up to see a dark shadow next to my bed, I spent the rest of my night not in my room. It took me awhile to sleep back in my room after that,

Pa, Uncle and I had just finished eating dinner, my uncle was down stairs putting a load of washing on, I was still eating and Pa was doing the dishes, the door bell went off. I swear pa had gotten rid of the door bell. I walked out the front to look,, and he pointed to the bell button, he said I had been waiting for someone to ring it, ( The bell button was given to grandma when she was very sick at home, we gave it to her to press when she needed something).

It had been awhile since I had a visit after that, Pa put a cover over the button, not sure why, I had found out recently we still had her ashes. At the start of March till a week ago Pa had one of grandmas nighties on his chair, I didn’t realise he had taken it down but two night after he had put in back in the door, Grandma showed her full self to me wearing the exact nights in the same spot where I had seen the stripy figure at the start. Once again I was walking to the toilet and I can remember seeing her standing there. It was comforting and closure for me, I guess I am getting use to seeing her.

Last Saturday, Pa and Uncle went out for a bit and I stayed at home, I was in my room with the door closed and usually I don’t hear much, but clearly I heard someone knock on the screen door, I went out there are no one was there, So I spoke – ” Hey Grandma, if you are knocking on the door its not funny, and If you want my attention please visit me at night so I can see you…”

It was going to be my first night sleeping in the dark in a while, I turned everything off , and went to bed at ten pm, I then woke half an hour later to the outline of a figure next to my bed with short hair staring at my bedroom door, I whispered Grandma, It then went in to floating particles and moved its way to my cupboard…. (I guess I did ask her to show herself at night again).

I do find seeing grandma is closure for me and scary at the same time. I am thinking about seeing someone who can talk to spirits, cause I’m curious to know more about her appearance.

Urban Exploring for me has become a lot more then looking at abandoned buildings, trains and Homes. The more I explore , the more I learn not all places are abandoned and that some places are still home.  Home is a story, every house and everyone has one.

I can not wait to see what the owners have in stall for this Building.

Im sure im not the only one who agrees Grandma was a person with lots if inner strength, if times were tough she would continue to thrive. Grandma was my umbrella when I was down or needed shelter. Grandma would invite ne to sleep in her bed with her if I had a nightmare, everytime after we woke she would remind how much of a pain I was to share a bed with.

I remember when she got a tablet and i linked her up to our wireless, she got pokies and bingo apps, but i swear her favourite was words with friends, because if I hadnt sent her a word back she would yell out from her room, Alex you havent sent me a word yet. Sometimes we would have about seven games going just so she had her words.

Grandma also took part in playing boardgames with my best friends Amie, Louie and Maddy. Greed and Skipbo, she would get go excited and if we took to slow to have our turn she would tell us to hurry up. Grandma was grandma to my friends , asking if they have a job yet or offering to make toasties, and if they needed a place to stay she was there for them too.

Im a bit more at peace now since grandma got her Angel wins, i still feel She is present. This weekend we will be scattering her ashes.

Spring is here is Australia and so are new additions to the animal kingdoms. Our vibrant bottle brush trees have lured aussie native birds, check put this gorgeous Scaly-breast lorikeet. One out of seven breeds in Australia.

Do i write, ponder or stare ? Where is lah lah land and whats in it… When people talk about it, its seems pleasent and peaceful.

She looks just over my shoulder , nothing is there, she tells me nothing is there. Bones, her bones are hard, her skin is like a thin top blanket, i get why she wears a few of them to keep warm. She ask why dont i take my coat off, i tell her i can feel the coldness in the air too

Have you ever watched someones face blotch up and the bottom part of the eye become watery just before they cry… I did for five seconds then my eyes wondered out the window.

Shes weak, she cant walk but she wanted to go to the toilet and she asked me to take the blankets off her feet and move them to the edge of the bed. I cant help her up , she has a catheder attached for her unwanted fluids to go in. She just looks so sad, she was just so determined to get to the toilet and i had to say no.

I sit and cry, my nose cries too. That bottle of wine i have a home is starting to look tasty. Look at grandma, one of the most healthiest woman i ever knew is lying in bed looking down and hopeless. Even i feel hopeless.

Whilst exploring the country near home, I discovered some on QR trains. They are still owned and unfortunately due to a rule of urban exploring I am unable to hand out location.

Did you know we have about 70,000 thoughts a day? Because i didnt until my mum told me. This blog post doesnt have a specific topic but can I gloat about how proud I am of me, cause its too late to ring mum.

I have joined the Reclaim the night committe board and Im proud. Its something my mum and I share a passion for. Plus mum took me to RTN protests when i was in primary school, 15 years ago.

RTN, Reclaim The Night start in Belgium, Germany. There was a conference held in 1976 both men and woman. At the conference mainly men were speaking disrespectfully of woman and the woman heard leading them to march the streets of belgium, which became world wide.

Im in Australia. Im on the RTN committee to let woman know I believe them, I will walk with them to end violance against woman and their children, I am also a victim, they are not alone.

Built in 1920, what is known to be Red Hill Skate Rink to urban explorers and the local community of Red Hill started as “Pops Popular Pictures.”

In 1969, the building was then transformed into a local sound lounge popular amongst teenagers before it became a Skate Rink a year later.

Due to Arson and a fiery blaze in year 2002 the building was left to stand alone.

Its now 2019 and new renovations have started inside the building creating a cinema, a ten million dollar job.

Every building has a story, just like every art work and its unfortunate this year the building is getting demolished. I fell in love instantly, street art is amazing, being an abandoned building hunter is eye opening.

Opened in the 1959, closed in 2007 this building became abandoned and cover in local street art.

In mid 2018 the government agreed keeping the structure of the building and turning it in a multipurpose precinct. 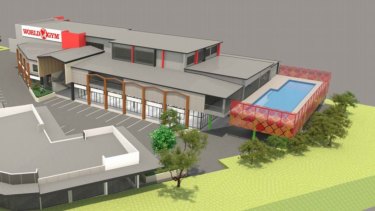 Here is the town planners design for refurbishment of his historic building.